Sonam Kapoor, who is in Dubai, shared a picture with her father Anil Kapoor and sister Rhea Kapoor. Her mom, Sunita Kapoor’s reaction was hilarious.

Sonam Kapoor is very close to her family and often shares pictures with them. Since the actress is currently in Dubai with her husband Anand Ahuja, she took to Instagram to share that she is missing her family and posted a picture with her dad Anil Kapoor and sister Rhea Kapoor. But wait, where’s her mother Sunita Kapoor? She raised this question as well in Sonam’s comments section.

Sonam Kapoor dug up a picture from an old photoshoot which features her father Anil Kapoor sitting on a chair as his two daughters, Sonam and Rhea, stand behind him. The three are donning traditional outfits in the sweet family portrait. Sonam captioned the post, “Majorly missing them (sic).”

WHAT COMMENTS DID SHE RECEIVE?

Anil Kapoor took to the comments section of Sonam Kapoor’s post and wrote, “Missing you and Anand too … (sic).” But what caught attention was her mother Sunita Kapoor’s reaction. She asked, “What about me (sic)???” Bibhu Mohapatra and Samyukta Nair, among others, dropped heart emojis on Sonam’s picture. Take a look: 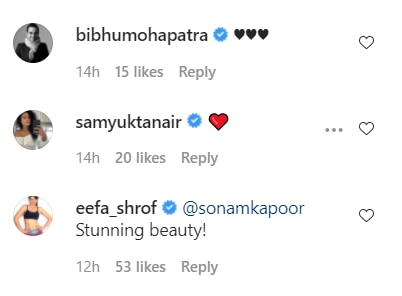 Last month on Diwali, Sonam shared throwback pictures with her family. One was with her in-laws and she talked about how she was missing them on the occasion. She wrote, “Happy Diwali from the Ahujas. I miss home, I miss the food and I miss Delhi. But all will be well again, it’s a new year and a new beginning (sic).”

Sonam shared another picture which featured the Kapoors, saying that she was missing them too. The post read, “Diwali is about family. And my family really loves celebrating it with all our friends and family. Next year it’ll be that again, I know it. I miss them with all my heart. And I hope I see them soon together (sic).”

On the work front, Sonam was last seen in the rom-com, The Zoya Factor. The Abhishek Sharma directorial also features South star Dulquer Salmaan in the lead.