Shaheer Sheikh in a still from Paurushpur.

Shaheer Sheikh shared his first look from period drama Paurashpur on social media. Ekta Kapoor shared it on her Instagram story and welcomed the actor to Balaji. The producer also mentioned that she was waiting to work with Shaheer Sheikh. The historical drama is set to premiere on ALTBalaji and Zee5.

Shaheer Sheikh shared a motion-poster, which introduced his character Veer from Paurashpur. He captioned it as, “Strong and confident, Veer is the vyapari who has entered Paurashpur. Can this mysterious vyapari be the change that Paurashpur needs? This epic story of the kingdom and wave of revolution in #Paurashpur is coming soon. Teaser out on 6th Dec on @altbalaji & @zee5shows (sic).”

Ekta Kapoor shared Shaheer’s look from Paurashpur on her Instagram story and wrote, “Welcome to Balaji @ShaheernSheikh. Was waiting to work with you.” 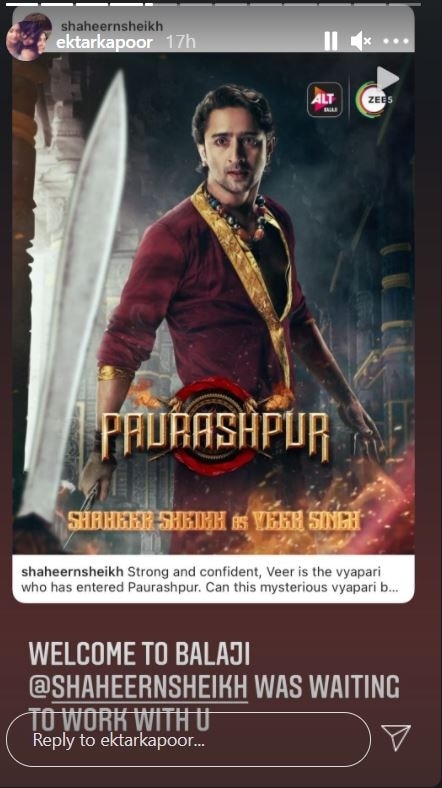 Paurashpur boasts of a huge ensemble cast that includes popular names from the industry like Annu Kapoor, Milind Soman, Shilpa Shinde, Shaheer Sheikh, Flora Saini, Anant Joshi and Sahil Salathia, among others. The show will be directed by Sachindra Vats and produced by Jaasvand Entertainment.

ALSO READ| Rupal Patel back as Kokilaben in Saath Nibhaana Saathiya 2: Ready for a dhamakedaar entry