Kajal Aggarwal’s sister and former actress Nisha Aggarwal took to Instagram to share a heartwarming photo of the two of them. In the first pic, which was taken before Kajal’s wedding, the sisters are all smiles for the camera. The second photo, which was taken several years ago, sees the Aggarwal sisters all decked up for a commercial. Nisha called it ‘reel vs real’ as she wrote that she misses her dear sister.

Nisha Aggarwal on Wednesday took to her Instagram page to share a photo in which the Aggarwal sisters recreated the same pose that they did for an ad, a few years ago. In the caption, she wrote that she is majorly missing Kajal Aggarwal.

She captioned the photo, “Real Vs Reel @kajalaggarwalofficial come back already. (sic),” with two heart emojis.

Nisha, younger sister of Kajal, often shares throwback pictures from their lives. The two are incredibly close, which is evident from the pictures they share.

WHAT WAS KAJAL AGGARWAL’S REPLY TO NISHA?

Kajal Aggarwal replied to Nisha’s post and said that she will see her very soon. Her comment read, “Bayveee major missing too! See you very soon (sic).”

The first picture was taken from the satsang that Kajal Aggarwal and her family organised before the wedding. For the occasion, Kajal wore a stunning anarkali set by Varun Bahl Couture.

Nisha’s post about her and Kajal Aggarwal went viral on social media with hundreds of comments. An Instagram user wrote, “Gorgeous sisters,” with double heart emoji, while another wrote, “There is no words to describe you how much beautiful are you in this dress.”

Here are some comments: 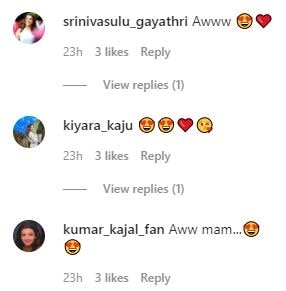 Kajal Aggarwal, after her Maldives trip, celebrated Diwali and Bhai Dooj in Mumbai. Earlier this week, she landed in Chennai along with her husband Gautam Kitchlu. She came to Chennai to meet director Deekay for a narration.

Word has it that Kajal was impressed with Deekay’s script and signed his horror film, which will have four heroines. Deekay and the film’s producers are now considering leading heroines for other roles.