Janhvi Kapoor shared two videos of herself dancing to a classical number. Her sister, Khushi Kapoor, ignores her.

Janhvi Kapoor shared two videos where she is seen dancing and Khushi Kapoor ignoring her.

Janhvi Kapoor is currently not shooting for any film and utilising her time off by spending time with her sister Khushi Kapoor and dancing. On Sunday, she shared two videos of herself where she is seen practising dance to a classical song. But what caught our attention was Khushi’s reaction to what Janhvi was doing. While Janhvi is trying to amuse her little sister with her performance, the latter is royally ignoring her.

Janhvi Kapoor shared two videos of herself where she can be seen dancing to a classical song. The actress is seen wearing a green kurta set with palazzo pants in the video. Sharing the video, she wrote, “Hope you guys are more amused than my sister was. swipe to see me make a booboo (sic).”

While Janhvi performs effortlessly in the first video, in the second one she commits a little mistake and makes it evident with her expressions.

HOW DID JANHVI’S FANS REACT TO HER VIDEOS?

While Khushi Kapoor is unfazed by Janhvi Kapoor’s dance, the latter’s fans cannot keep calm. The comment section of her post is flooded with praises for the actress. Many called Janhvi multi-talented, while others wrote that the video reminded them of her mother, Sridevi.

Have a look at some of the comments on her post here: 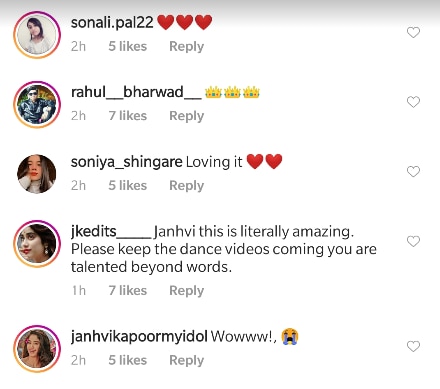 Janhvi Kapoor celebrated Diwali with dad Boney Kapoor and sister Khushi Kapoor. She shared beautiful pictures from the festival on Instagram. Janhvi looked stunning in a yellow saree while Khushi wowed us in a blue ensemble with golden embellished dupatta.

WHAT’S ON THE WORK FRONT FOR JANHVI?

Janhvi Kapoor was last seen in Netflix’s Gunjan Saxena: The Kargil Girl. Even though the film faced controversy for merging facts and fiction, Janhvi received appreciation for her performance. Her upcoming projects include Dostana 2 with Kartik Aaryan and Laksh Lalwani. She will also be seen in Roohi Afzana with Rajkummar Rao. In Karan Johar’s Takht, the actress will be sharing screen space with Ranveer Singh, Kareena Kapoor, Alia Bhatt, Vicky Kaushal, Bhumi Pednekar and Anil Kapoor.

ALSO READ | Janhvi Kapoor tried not to annoy Khushi because on her birthday. No promises, though

Mbappe a doubt for PSG’s UCL tie vs. Bayern