The deadlock between protesting farmers and the Centre continued as no consensus was arrived at the meeting held between farmers’ leader and government ministers on Tuesday.

The agitating farmers refused to accept the Centre’s proposal to form a committee to discuss the contentious farm laws and said that their only demand is the complete rollback of the three legislations.

As more farmers joined the protest at the borders of Delhi-NCR, security was stepped up and the agitation blocked the arterial Delhi-Noida link road.

1. Leaders of 35 farmers unions met Agriculture Minister Narendra Tomar and Commerce Minister Piyush Goyal for talks at the Vigyan Bhawan today in a bid to bring a resolution to the months-long stir.

2. Tomar proposed that the government will set up a five-member committee comprised of officials, agrarian experts as well as farmers’ leaders to look into the three agricultural laws and resolve grievances.

3. The farmers rejected the proposals put forward by the government and said that their protest will continue till the government repeals the newly enacted farm laws.

“Our movement against farm laws will continue and we’ll definitely take back something from the government, be it bullets or a peaceful solution. We’ll come back for more discussions with them,” said Chanda Singh, a member of the farmer delegation after the meeting.

Our movement against Farm Laws will continue & we’ll definitely take back something from the Govt, be it bullets or a peaceful solution. We’ll come back for more discussions with them: Chanda Singh, Member of Farmers’ Delegation who met Union Agriculture Minister in Delhi today pic.twitter.com/YgenF7koXN

4. Sources have revealed that during talks with Centre, a farmer representative reportedly said that the new farm laws are a ‘death warrant’ to farmers.

“The farmers have no objection to the committee but our protests will continue till the committee comes to a conclusion,” a farmers’ representative said.

5. Both sides said that the meeting was good and another round of talks will be held on December 3.

“The meeting was good and we have decided that the talks will be held on December 3. We wanted a small group to be constituted but farmers’ leaders wanted that the talks should be held with everyone, we do not have problem with it,” said agriculture minister Narendra Tomar.

The meeting was good and we have decided that the talks will be held on 3rd December. We wanted a small group to be constituted but farmers’ leaders wanted that the talks should be held with everyone, we do not have problem with it: Union Agriculture Minister Narendra Singh Tomar https://t.co/73zml1sb0r pic.twitter.com/9pm3kMgfLk

6. Agriculture minister Narendra Tomar also appealed the farmers to end their protest and come for talks. The government was, however, firm in its stand that a high-level committee must be formed to look into the issues and wanted the farmer representatives to further consider the proposal.

Sources said the ministers were of the view that it was difficult to reach a decision while interacting with such large groups and therefore they suggested meeting with a smaller group, but the farmer leaders were firm that they would meet collectively only.

7. Another round of talks got underway later in the evening at the Agriculture Ministry with representatives of Bharatiya Kisan Union (BKU) at 7 pm and was attended by representatives from Haryana, Uttar Pradesh, Delhi and Uttarakhand.

8. Meanwhile, BJP’s ruling coalition partner in Haryana, the Jannayak Janata Party, said that the Centre should give a written assurance to farmers that the minimum support price system will continue.

9. As hundreds of farmers gathered at the Noida and Delhi border on Tuesday, the Chilla border remained shut. The Delhi Traffic Police on Tuesday advised commuters to take alternative routes. The other two borders of Delhi — Tikri and Singhu remain closed.

10. On Tuesday evening, Bilkis Dadi, the octogenarian who was the face of the months-long Shaheen Bagh protest was stopped by Delhi Police personnel at the Singhu Border from joining the farmers’ protest. 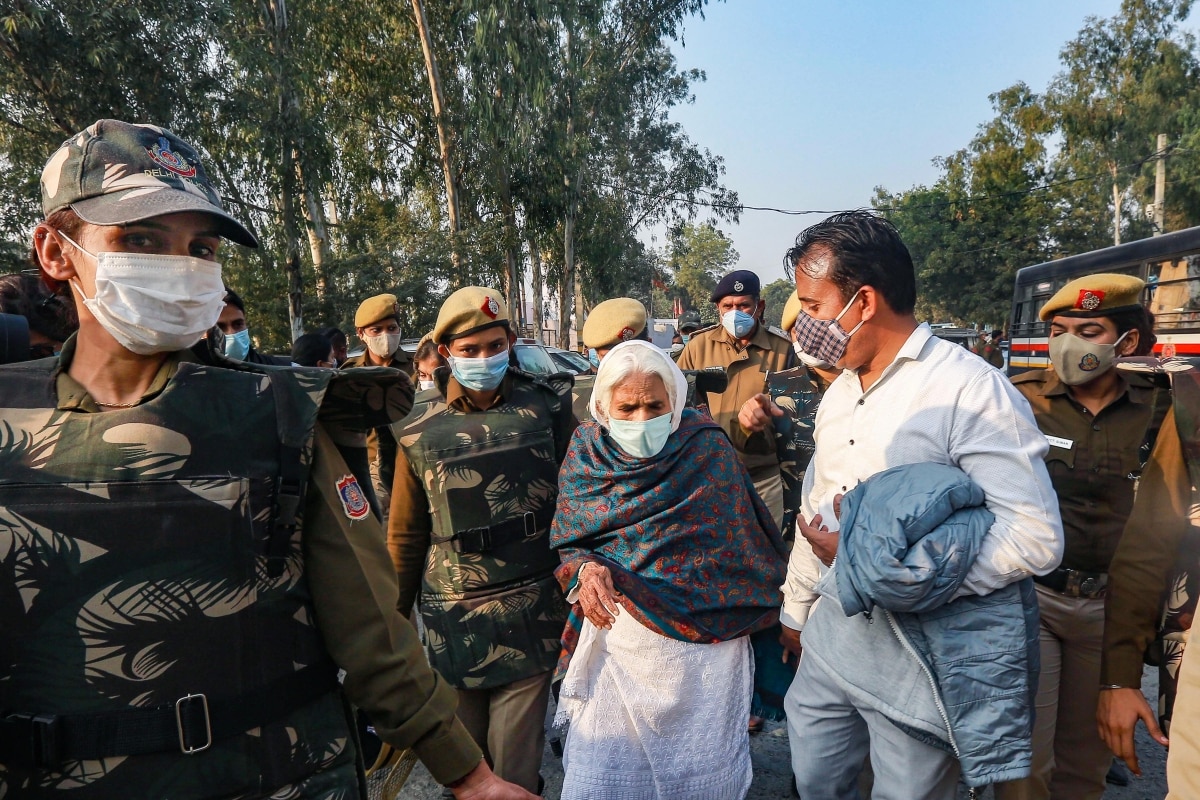