Kartik Aaryan’s hilarious response to a fan has caught attention of many. The actor shared a new post, talking about the importance of wearing a mask.

Kartik Aaryan enjoys a huge fan following. A sea of fans storm the actor everytime he steps out. One of the reasons for Kartik’s popularity is his relatability. Kartik is a natural when it comes to having a conversation with his fans and in his recent Instagram he showed his fun side.

The highlight of Kartik’s latest post was his hilarious reply to one of his fans who complimented the actor’s acting skills. The fan wrote, “I love you sir Im your biggest fan and you are lion and roar of lion is your acting.” Kartik responded saying, “Love you too Lekin meri mummy ne aapko paise toh nahi diye?”

Kartik interacted with a few other fans in the comments section of this post. 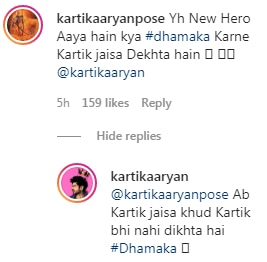 On the work front, Kartik announced his next film, titled Dhamaka, on his birthday. Kartik plays the role of a journalist in the film. Dhamaka will be directed by Ram Madhvani.

Kartik will also be seen in Bhool Bhulaiyaa 2 and Dostana 2.

ALSO READ | Kartik Aaryan’s next film is a thriller directed by Ram Madhvani?