A viral video shows BJP flags being waved in what is being claimed as Pakistan-occupied Kashmir (PoK). India Today Anti Fake News War Room found this claim to be false.

A still from the viral video

An 11-second video of people waving BJP flags on the rooftop of a bus is circulating on social media with the claim that it is a scene from Pakistan-occupied Kashmir (PoK). The caption of one such video reads, “Bjp flag in pakistan occupied kashmir”.

India Today Anti Fake News War Room (AFWA) has found the claim to be false. The video is from an election rally in Kishtwar district of Jammu and Kashmir. The Union territory is witnessing district development council (DDC) elections in eight phases.

The archived versions of similar posts can be seen here, here, here and here.

With the help of InVID tool, we found a slightly longer version of the same video uploaded on the official Facebook page of BJP’s J&K unit on November 22, 2020.

The video description reads, “#DDCElections #JKWithBJP Visuals from #JammuKashmir clearly indicates the love and affection of the people as well as their rock-hard faith on the leadership of PM Narendra Modi Ji”.

Here is a screenshot comparison of the viral and original videos. When we contacted India Today’s Kashmir correspondent, he told us the video could be from the ongoing DDC election campaigns in J&K. He also said that the video cannot be from North Kashmir as the region is receiving snowfall. No trace of snow can be seen even in the longer version of the video.

We then contacted Manzoor Bhat, head of media and information technology department of BJP’s J&K unit. Bhat confirmed to us that the video is from a recent election rally in Jammu and has got nothing to do with PoK.

“The video is from an election rally organised in November in Kishtwar district of Jammu region. The rally was organised by our party member from Kishtwar, Tariq Ahmed, as part of the ongoing DDC elections and by-polls. The social media claim that the video is from PoK is false,” Bhat said.

DDC elections and panchayat bypolls are being held in eight phases from November 28 to December 19 in J&K. This is for the first time after the abrogation of Article 370 and reorganisation of J&K that it is going to polls.

Therefore, it is clear that the viral video is from an election campaign of BJP in Kishtwar district of J&K and not a visual from PoK. 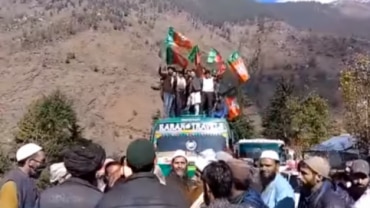