The results of the high-stakes Greater Hyderabad Municipal Corporation (GHMC) municipal poll will be announced today, November 4, 2020. Until the time of filing this story, Telangana’s ruling Telangana Rashtra Samiti (TRS) party emerged as the single-largest party followed by BJP and AIMIM.

Amid this, according to a claim on social media, AIMIM chief Asaduddin Owaisi said he would convert to Hinduism and name himself Bhagya Raj Tripathi if BJP wins the Hyderabad elections.

One such claim reads, “I will convert to Hinduism and name myself Bhagya Raj Tripathi if BJP wins GHMC elections” declares AIMIM chief Asaduddin Owaisi #GHMCResults.”

India Today Anti Fake News War Room (AFWA) has found that that the claim is false. The office of AIMIM confirmed to AFWA that Owaisi did not make any such statement.

Upon researching, we could not find any credible media report on Owaisi claiming to convert to Hinduism and change his name if BJP wins the Hyderabad municipal election. No such statement was also found on the official Twitter handle and Facebook page of Owaisi and the AIMIM party.

We also traced the claim to a Twitter handle named “The UnPaid Times” that identifies itself as an Indian Satirical News Website.

However, reading through the comments under this tweet, it became clear that several people fell for the tweet without realising it was a satire.

NO NAME CHANGE FOR HYDERABAD: OWAISI

Hyderabad witnessed a high-pitched campaign by nearly all parties ahead of the municipal election that was held on December 1. During their campaign in Hyderabad, several BJP leaders, including Uttar Pradesh Chief Minister Yogi Adityanath made a pitch for renaming the city as Bhagyanagar.

According to a report published by India Today on November 29, Owaisi had attacked Yogi’s pitch for renaming Hyderabad by saying, “The ones who want to change the name of Hyderabad, their entire generation will end but Hyderabad’s name won’t change. We speak the name of Ali, we will change your name”. 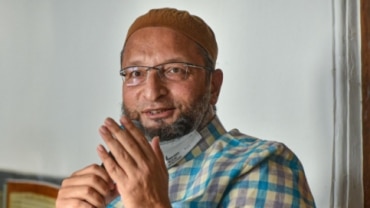 ClaimAIMIM chief Asaduddin Owaisi said he will convert to Hinduism and name himself Bhagya Raj Tripathi if BJP wins the Hyderabad civic body election.ConclusionThe office of AIMIM confirmed that Owaisi did not make any such statement. The office further noted that they will demand legal action against people spreading such false claims.