Two pictures, one of a Sikh man with a bandage to the left eye and another of a Sikh man in military uniform, are viral on social media with the claim that they are the same person a retired Army officer who was injured during the ongoing farmers’ protests near Delhi.

The Hindi caption along with one such post translates to, “Both pictures are of the same person. One is a protector of our borders and the other is fighting for farmers’ rights after retirement. He is PPS Dhillon. For the IT cell, he’s a Khalistani.”

India Today Anti Fake News War Room (AFWA) has found the claim to be misleading. The man in military uniform is indeed retired Indian Army Captain Pirthipal Singh Dhillon, but he is not participating in the farmers’ protest.

With the help of reverse image search, we found Dhillon’s picture on the Facebook page “Sikh Military History Forum”. The picture was uploaded by one “Sukhwinder Singh Sarpanch Uboke” on November 29.

We also found a similar picture from the birthday celebration uploaded on the same day on Sukhwinder Singh’s personal Facebook profile.

AFWA reached out to Sukhwinder Singh over Facebook, who confirmed to us that the retired Captain seen in the viral image is his father Pirthipal Singh Dhillon and he is not participating in the farmers’ protest.

“The person seen in the picture is my father (Retd) Captain Pirthipal Singh Dhillon. It was his 74th birthday on November 29. He is still at home and not participating in the protest. The other image of a Sikh man with an injured eye is not my father,” said Sukhwinder Singh.

AFWA could not independently verify the identity of the injured man in the viral image. However, this picture too has been circulating since November 29 on social media, identified as a farmer who was injured during the ongoing protest.

A video of the same man was also uploaded by a Twitter user on November 29.

‘Shame’ is a small word for you !! Take back your farmers’ against Bill..
More power to our #Farmers
” RESPECT FARMERS “#SupportFarmers #IStandWithFarmers #FarmersProtest pic.twitter.com/LYmjscvW5N

However, it is clear that the man with the bandaged eye is not retired Army Captain Pirthipal Singh Dhillon. The latter is not participating in the ongoing farmers’ protest. 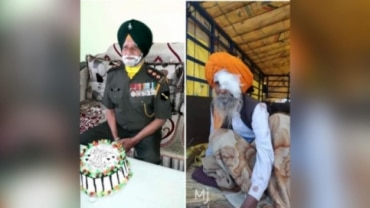 ClaimImages show retired Army Captain PPS Dhillon who was injured during the ongoing farmers’ protest near Delhi. ConclusionDhillon’s family confirmed that he is not participating in the farmers’ protest and the injured man is not him.