Ayesha Shroff recently took to her Instagram stories and posted a video of Disha Patani kickboxing at her gym. The two share a great bond and often comment on each other’s posts.

Tiger Shroff and Disha Patani are often in the news for their rumoured relationship. However, it is Disha’s bond with Tiger’s mom Ayesha Shroff and sister Krishna that grabs eyeballs. They are often seen posting pictures with each other and commenting on each other’s post. Now, Ayesha Shroff took to her Instagram stories and shared a video of Disha Patani from one of her kickboxing sessions.

Ayesha Shroff recently took to her Instagram stories and reposted a video of Disha Patani from one of her kickboxing sessions. Ayesha Shroff tagged Disha with fire emojis while sharing the video.

Check out a glimpse of it here: 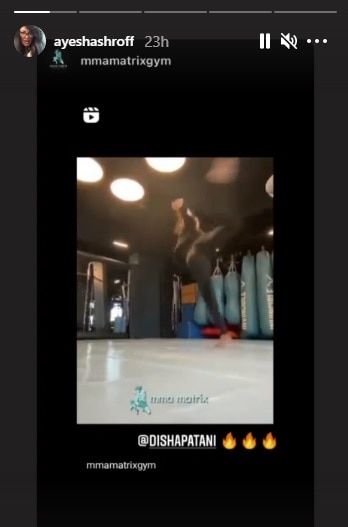 Recently, Ayesha Shroff had shared a picture with Tiger. In the caption, she revealed that the photo had been taken by her daughter, Krishna Shroff. Ayesha Shroff had captioned her post, “In the arms of one love and shot by my other love @tigerjackieshroff @kishushroff (sic).”

Disha Patani was all hearts for the picture as she commented on it saying, “So Cute (sic),” along with three heart emojis. Yesterday, Krishna Shroff posted a selfie on her Instagram stories where she was seen chilling with Disha Patani and another friend at her apartment. Krishna was seen wearing a blue tank top while Disha was seen in blue pants. She was talking on the phone.

Krishna captioned the picture with a hashtag, “Nonewfriends (sic).” WHAT’S ON THE WORK FRONT FOR DISHA?

Apart from that, she will also feature in Ekta Kapoor’s KTina. The film went on floors last year in October. Disha also has Ek Villain 2 co-starring Tara Sutaria and John Abraham in her kitty. She was last seen in Malang which released earlier this year.