China has been steadily upgrading its dual-use airports all along the India-Tibet border over the past decade. In the wake of the India-China standoff in eastern Ladakh, the People’s Liberation Army Air Force (PLAAF) has, however, increased the upgradation of airports to include air defence and other specific requirements of the air force, including accommodations.

Satellite images indicate that the speed of construction of these facilities has increased manifold after March 2020.

The Nyingchi airbase is among the seven Chinese military airbases which have shown increased activity in the past few months and Indian agencies are closely monitoring them.

India Today’s OSINT team, through the latest high-resolution satellite imagery, tracks the progress of construction at the dual-use airport of Nyingchi opposite India’s Tuting sector, barely 15 km from the Indian border.

Nyingchi, being largely a military town, attains importance as it is home to the two main – 52nd and 53rd – mountain brigades of the People’s Liberation Army (PLA) in Tibet. The Nyingchi airport can serve the two brigades for supply and reinforcements and can be used effectively for switching of forces by transport aircraft.

The satellite imagery parsed by India Today’s OSINT team over the past two decades indicates that construction of the Nyingchi airport started in 2004 and was complete by July 2006.

The small airport with a 3 km-long airstrip is located along the Brahmaputra River and is very close to the Indian border.

The airport saw expansion of the apron and a new larger reception and lounge building besides the previous structures from 2014 to 2017.

After the Doklam standoff, by the end of 2017, China had planned to upgrade this dual-use airport to a more air force-oriented airbase.

In 2020, hectic activity was observed at the airbase. Levelling and grading work for possibly a taxiway that can be used as a second airstrip had begun. 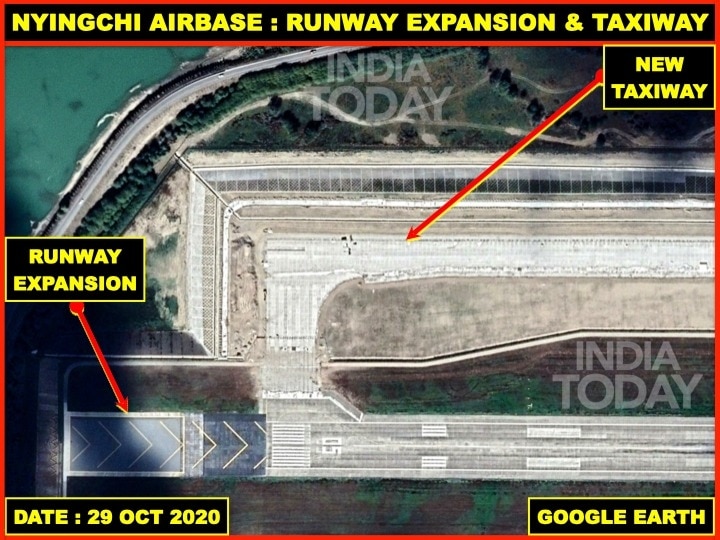 The airstrip has been expanded on the south-western end of the runway by 150 m and has more space on the north-eastern side for expansion.

Once expanded on either side, the runway of 60m width will be 3,500m long and will be able to support any major transport aircraft of the PLAAF inventory.

The new taxiway constructed on the western side of the runway is 45m wide and 3,000m long. In case of emergencies, it can also be used as a runway.

The apron constructed in 2006 was only 140 m long and 140 m wide. It was expanded by almost 200 m in 2014.
The airport got a larger terminal building constructed during the Doklam standoff capable of handling four additional large aircraft.

The recent construction seen in satellite images indicates another expansion of the apron in 2020. The apron has been expanded by almost 370 m in width and can easily accommodate seven large transporters, with a total handling capacity of almost 12 aircraft at a time.

An area of 620 m x 320 m was cleared early this year by felling forest cover and levelling the area, as reported earlier by India Today.

The construction seen in high-resolution satellite imagery now indicates that this area was cleared for a surface-to-air missile (SAM) battery. 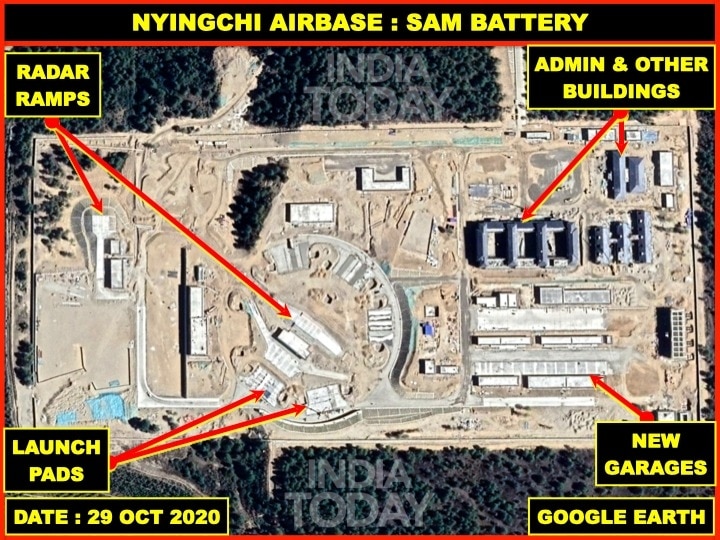 The area has three radar ramps and six launch pads with a circular layout. The size of 160 m diameter of the layout suggests that it could be an HQ-6 SAM battery that is likely to be located here.

Previous spotting of HQ-16 in this area could also be another possibility that needs to be verified once deployment takes place.

A large number of new buildings for accommodating troops and other equipment have been created to the eastern side of the airstrip.

The infrastructure facilities saw additions during the Doklam standoff in 2017 when China built possible vehicle parks for armoured vehicles and to accommodate more troops. The construction is now complete and new buildings have come up this year. 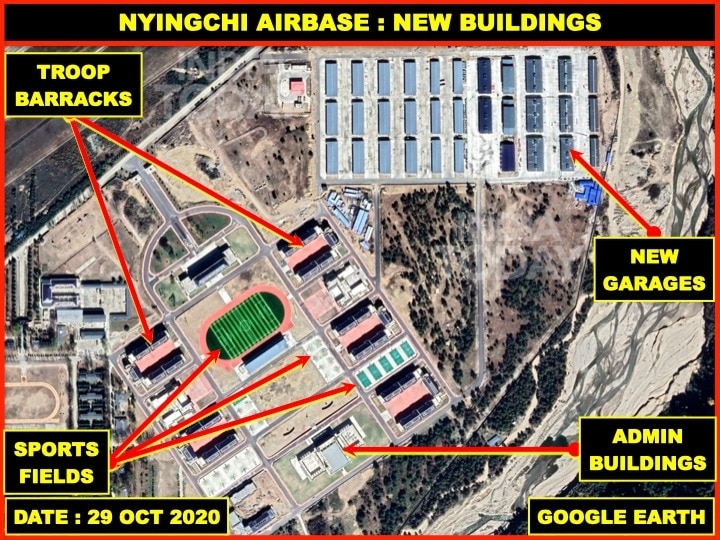 There are 15 new garages constructed this year with two of them having high bays, indicating that these two will be used by SAM battery.

A large shopping complex has been created outside the airbase possibly catering to the needs of this military township, suggesting that it would be manned by the PLA rather than civil agencies like Haifa Mall.

(Col Vinayak Bhat (Retd) is a consultant for India Today. A satellite imagery analyst, he served in the Indian Army for over 33 years.)