China’s People’s Liberation Army (PLA) seems adamant to continue with the present standoff in eastern Ladakh beyond winters – or much longer – possibly to tire out India. Satellite images suggest Beijing has continued the same stance all along the Tibet-India border.

In March-June 2017, the Chinese PLA had carried out massive incursions to grab Bhutan’s territory in and around Doklam plateau and threatened India strategically. The latest satellite images released by space firm Maxar Technologies reveal the construction of road and civilian settlements, as claimed by China, inside Bhutan’s territory.

The Indian Army considering its own strategic interests due to the proximity of this area to Siliguri Corridor, also known as the Chicken’s Neck, and a friendly neighbour’s concerns had intervened to stop the Chinese Communist Party’s (CCP) advance in Sharsingma or Yatung valley.

However, the latest satellite images clearly indicate that China has yet again stabbed the international community in the back, especially Bhutan, by grabbing further land along the Amo Chu river.

India Today’s OSINT team investigates the progress at these PLA incursions critical to Indian forces in Eastern Zone through the latest satellite images.

During Doklam, India had drawn certain red lines and conveyed them to China expecting the PLA never to cross them.

The two main red lines mutually accepted were that India will not accept crossing of Doklam Nala to the south and Amo Chu to the east by the PLA.

The latest satellite imagery provided by Maxar Technologies dated October 28, 2020, clearly shows that China has built a bridge across the Amo Chu river. The bridge located approximately 400m south of the new Pangda Phase-I village is about 40-45m long and about 6m wide.

The river, seen going around a large island in 2017 imagery, now passes on the eastern side of the island with the western side reclaimed.

The reclaimed area could be used for construction of government buildings if and when China plans to open this route further for Ha county in Bhutan of which it is a part. The latest satellite images provided by Maxar indicate that forest cover on the eastern bank has depleted possibly due to pruning or clearance by the Chinese PLA. This cleared forest area could be used for green houses, typically seen in most PLA posts.

The high-resolution image of October 28 shows a Chinese road being surreptitiously constructed almost up to 12km beyond the Tibet-Bhutan border.

The road construction is being carried out after large revetments formed with huge cement blocks all along the western bank of the river have been constructed to prevent river water overflowing on the constructed areas. 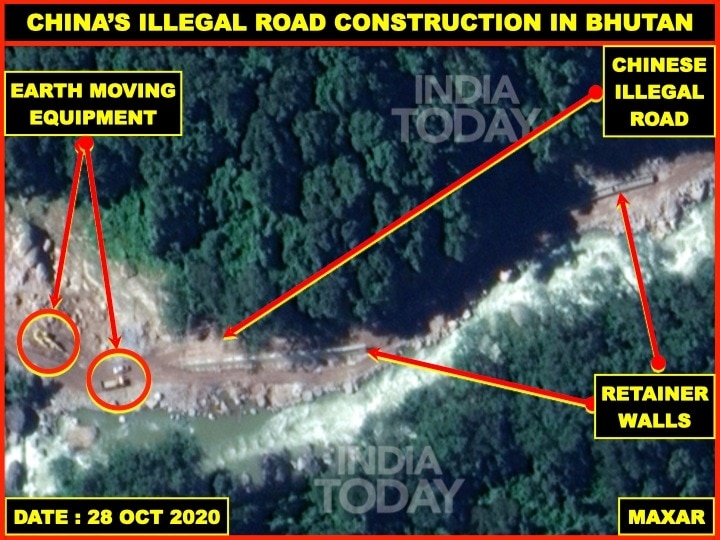 A village uniquely named Pangda (Panda) Phase-I village with at least 30 houses has been constructed along the Amo Chu on its western bank. The village has all buildings constructed from iron scaffoldings put together over an area prepared with cemented plinth.

The area along Amo Chu’s western bank is being prepared for Pangda Phase-II village. The area is being levelled and revetments placed. The small hutments purposely built to occupy and grab land from Bhutan does not have any facilities for livelihood.

Earlier, India Today TV had reported the existence of such facilities along the Line of Actual Control region months before the stand-off between the two sides began in May 2020. “Both the army and civilians can use it. The development also strengthens the claim over land in case of an escalation. They are extensions of military cantonments,” an official said.

“If these were indeed meant for civilians, people would be residing here. But these integrated villages largely remain unoccupied,” said an official in the security establishment. These villagers would not have any source of survival in this remote location, indicating that they would be occupied by the PLA rather than civilians as observed in ground photos.

The reverse slope of Doklam plateau, first occupied by the Chinese PLA in as early as March 2017, has now been developed into a proper base with concrete buildings. A possible artillery position has been constructed with hardened storage for guns and a gun commander’s bunker too. 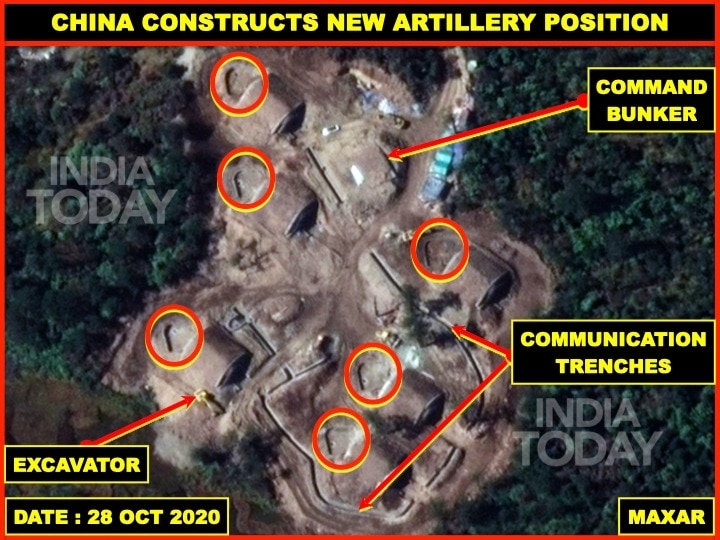 The latest images show that work still continues at improving the defences around this gun position with communication trenches and tracks all around.

Bhutan had rejected reports of the Chinese having established villages inside Bhutanese territory in Doklam. “There is no Chinese village inside Bhutan,” Bhutan’s envoy to India, Maj Gen Vetsop Namgyel, had told India Today.

The Siliguri Corridor, with these road and village constructions, has become closer for China through occupied Tibet and now Bhutan. This threatens India strategically with the AH2 road, now barely 70km at Siliguri’s eastern bypass or at Jalpaiguri bridges.

(Col Vinayak Bhat (Retd) is a consultant for India Today. A satellite imagery analyst, he served in the Indian Army for over 33 years)