Anushka Sharma wished veteran actor Boman Irani a happy birthday on Instagram. She shared a photo of Boman Irani and wrote a sweet message along with it.

Anushka Sharma took to Instagram on Wednesday (December 2) and wished Boman Irani a happy birthday. The actress shared a photograph of the actor as her Instagram story along with a sweet message. In the pic, Boman Irani can be seen smiling. He is dressed in a formal attire.

Along with the photograph, Anushka wrote, “Happy birthday Boman Sir. Wish you all the happiness, joy and beautiful things in life (sic).” 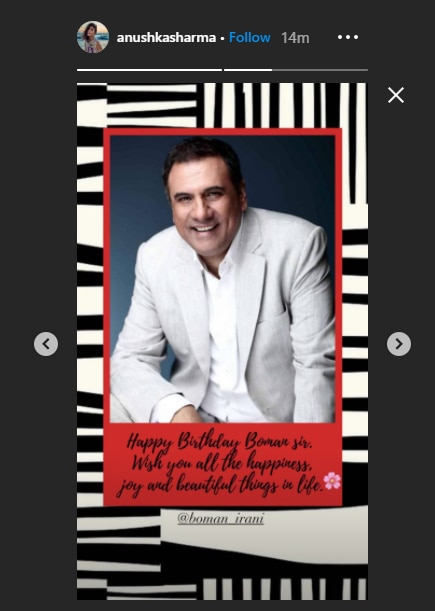 Boman Irani turns 61 today and the actor has been a part of various Bollywood films including Munnabhai MBBS, 3 Idiots, Main Hoon Na, Khosla Ka Ghosla, PK, and Made in China. He will next be seen in Ranveer Singh and Deepika Padukone-starrer 83. The film is slated to release next year.

Coming back to Anushka Sharma, the actress is expecting her first baby with husband Virat Kohli. The couple announced the news in August and the baby is expected to be born next month. Anushka and Virat got married in December 2017 and are one of the most-loved couples of Bollywood. The two often share photos and videos with each other.

Take a look at some of their posts here:

Anushka Sharma and Virat Kohli’s baby will be called a coronial.

ALSO READ | Virat Kohli and Anushka Sharma’s first child arriving Jan 2021: And then we were three