Anil Kapoor shared some monochrome pictures of himself on Instagram. Neetu Kapoor, who will be seen with him in Jug Jugg Jeeyo, gave a thumbs up to the pic.

Anil Kapoor and Neetu Kapoor will be seen together in Jug Jugg Jeeyo.

Anil Kapoor has been busy shooting for his upcoming film Jug Jugg Jeeyo. The actor is appreciated for looking younger than his age, and he looks as handsome as ever in his latest pictures on Instagram. He shared some stunning black-and-white pictures of himself, which were appreciated by his Jug Jugg Jeeyo co-star Neetu Kapoor.

Anil Kapoor often delights his fans with his dapper looks. In his recent monochrome pictures, he can be seen dressed in a black t-shirt, jeans and a stylish jacket. He borrowed from Eliott Erwitt’s quote in the caption and wrote, “Color is descriptive. Black and white is interpretive (sic).” 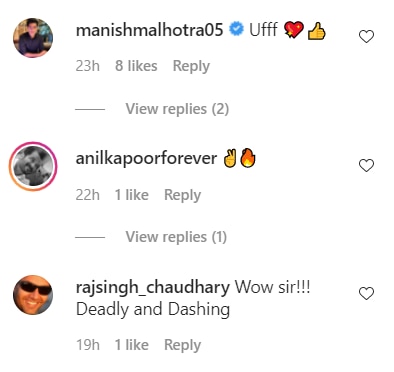 HOW DID ANIL KAPOOR MARK 29 YEARS OF LAMHE?

To celebrate 29 years of the film, Anil Kapoor shared an adorable collage on Instagram with his wife Sunita Kapoor. It included the couple’s throwback picture from Lamhe’s shoot and one clicked in recent times. The actor revealed that they were in London to celebrate their babymoon during Lamhe as Harshvardhan Kapoor was preparing to enter the world back then.

Anil Kapoor wrote, “I guess you’d call this our babymoon, right @kapoor.sunita?! This picture was taken during my outdoor shoot in London for Lamhe… @harshvarrdhankapoor, you were there too, preparing to come into this world #29YearsOfLamhe (sic).”